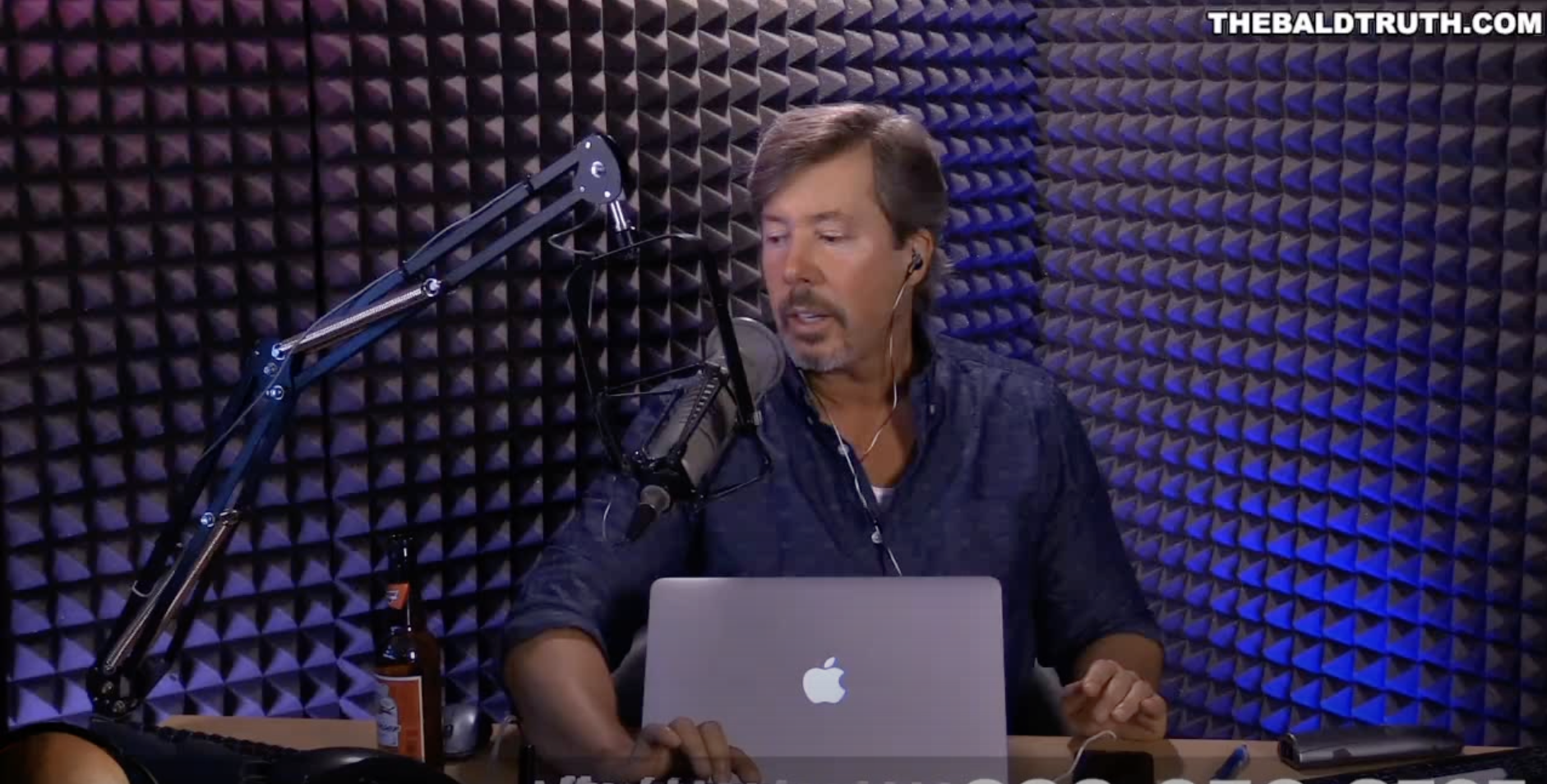 The Bald Truth is a radio show about hair loss which, according to its website, “has been advising listeners on issues ranging from building self confidence and creating sexual attraction to overcoming…the modern man’s Achilles’ heel, male pattern baldness.” Host Spencer Kobren founded the show over 19 years ago, and there are over 2,200 episodes in the show archives.

In Episode 137 (2015), the hosts took a call from a listener who said he was a medical doctor, and described his experience of severe and lasting symptoms after stopping finasteride. The call transcript below has been lightly edited for readability. Bolding has been added to certain phrases to make scanning easier.

CALLER TO BALD TRUTH SHOW (starting at 01:28:53): Hi this is Tom. I’m a physician in Baltimore and I was wondering if I can share my experience with Propecia with you and your listeners.

I’m a nephrologist, a kidney specialist. I’m 43 years old now and I was on the drug for about a year and a half. I took the drug from August of 2013 until December of 2014.

Basically my story is, I’m a physician just outside of Baltimore and I was losing my hair, probably started maybe around 2008, 2009, my hair was slowly falling out. So in August 2013 I really wanted to do something about it so I scheduled an appointment with a Bosley physician. At that time I was very interested in having hair restoration but with my busy job I couldn’t schedule the surgery right away. So the physician recommended that I try Propecia and he said that I’d be a very good candidate. Doing some initial research, I thought that I was a very good candidate.

HOST: While you were on the drug, were you seeing positive results as far as your hair is concerned?

Well to make things more complicated: I started in August 2013 and then when I got some time off in November of 2013, I had a hair restoration procedure.

H: So you ended up getting work done [at] a Bosley [hair restoration clinic]. How was your work?

I think it was reasonably good. I think it was OK. At this point, considering what’s happened to my life, the hair restoration procedure really doesn’t mean anything at all. But the sexual side effects just continued to persist and I thought: This is not worth it, so I quit the medicine in December of 2014. And then over the next couple of months I noticed a very modest improvement in my sexual side effects.

H: What exactly were the side effects?

H: How many months after you stopped using the medication?

Probably about four months after.

I don’t know. I think nobody knows. I think probably the enzyme, 5-alpha reductase continued to be inhibited for some reason. I think everyone’s metabolism is a little bit different. Although the studies show that in most men the 5-alpha reductase is inhibited between 60 and 70%, there’s probably a small percentage of guys where it’s inhibited at a much higher rate than that. Some guys, they probably don’t make the enzyme quite as rapidly as other guys. It’s very hard to say.

H: Have you had your levels tested?

I’ve seen a specialist at Johns Hopkins. My testosterone levels have always been normal. My DHT has been at the lower limit of normal.

H: What do these endocrinologists think? Does he believe that there’s this significant phenomenon? Has he seen it in his practice?

This specialist that I saw, I saw her the first week of June. She said certainly I don’t see anything else that it could be besides the finasteride. She said give it six months, come back and see me in December. Things since then have pretty much been a nightmare.

H: I’m sorry you’re going through this. It’s important that there are people who are experiencing this, or those who believe they’re experiencing it, come on the show and talk about it. We’ve had great results, most of the guys that call the program have had good experiences. But there are those who are the anomalies. Maybe there’s a small subset of guys like yourself who, for whatever reason you’re affected by the drug this way.

As a physician I want to make a couple of observations. I certainly agree that [in] most men, Propecia is a very well-tolerated medication, but for a small percentage of men it can have disastrous side effects. I think a lot of men in their 20s, 30s and 40s, when they’re faced with hair loss they have that decision about whether they want to take Propecia. I just want to put in perspective because of what’s happened to me, looking back, in the way that I view it, as a man in their 20s, 30s and 40s who’s losing their hair: just imagine you had 100 pill bottles in front of you. Each pill bottle has medication in it for your hair loss. And you have to take Propecia for a year, probably for a couple years to see a significant or noticeable difference. The way to think about it is, you have to take that pill in that bottle for that period of time and two or three of those 100 pill bottles in front of you has the potential for giving you long-lasting and possibly permanent side effects. If your listeners thought about it in that way they may have a different perspective about whether or not they want to take Propecia.

When I started taking it, when guys are losing their hair they’re kind of freaking out. You want to do something to preserve the hair you have left. Going [through] what I’ve gone through, if you put it in perspective I think it helps. A lot of these side effects unfortunately are not treatable.

H: Men should ask themselves one very important question: do I want to continue to have normal sexual function, or do I want to take a pill to combat my hair loss. That’s basically what you’re saying that people should think about. There is this subset of guys who react to this drug in this way. Am I willing to take that risk? I do think in some cases there is some fearmongering, but then there is the reality of what you’re going through.

I certainly don’t have any problems against combatting hair loss such as hair transplant, minoxidil, light or laser therapy — all those things in my opinion are very very safe. Ultimately, a guy in his 20s 30s or 40s has to make the final decision. What people consider “safe” treatment really depends on your perspective. Most medications, people take them basically to prolong their life. Propecia certainly can improve the quality of life, certainly is not going to extend your life. But for a purely cosmetic reason—

H: Doc, it’s really beyond the purely cosmetic reason. It’s about the emotional aspect, emotional factors that are involved. Unfortunately you were one of these guys where, at least at this point, you’re still dealing with the adverse side effects. As a physician you also know that it is possible that in time this will dissipate. I’m sure you also realize that once this happens to you, there could be an extenuating circumstance, it could be prolonged by a possible placebo effect.

Certainly, once you develop those symptoms, there could be some psychologic… even in some men some psychiatric component to it as well. I definitely agree with you 100%.

H: What can we call you?

H: Dr. Tom, I’d like you to keep us abreast of your situation. Your story is important. More listeners should hear stories like yours, especially since you are a physician. I’m taking your word for it that you are a physician. But you sound very sincere. I would love for you to call back, and hopefully next time you call back you can give us some good news. Thank you very much for the call. I will you the best of luck.

Many websites tout the benefits of finasteride for treating hair loss, while downplaying the risks. This site is different: it puts risks in the foreground, accompanied by supporting evidence. Learn more